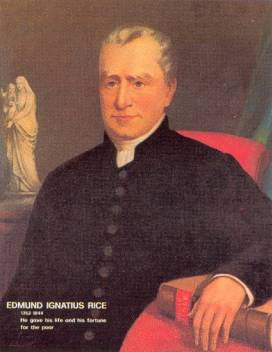 Iona College opened its doors in 1940, with nine Christian Brothers and six lay faculty greeting the first class. The Christian Brothers named the College after Iona, the island monastery of St. Columba [in Irish:? St. Colmcille] located off the west coast of Scotland. Columba founded the monastery in 563 CE. The Congregation of Christian Brothers was itself founded in 1802 by Blessed Edmund Ignatius Rice in Waterford, Ireland.

In 1940, the idea – and ideal – of the College’s founding community of Brothers was to start a small, affordable college for the sons of New York’s working class. At the time, the Christian Brothers taught in seven high schools in the Archdiocese of New York, including Iona Prep, All Hallows, Rice High School, and Power Memorial. They recognized that many of their graduates could not afford the cost of local universities, and so they started Iona, opening new paths to economic and social advancement.

Small it was when it started in September, 1940, and smaller it became after the U.S. entered World War II with the Japanese attack on Pearl Harbor in December, 1941. For example, the fall of 1943 began with 94 students, but the spring term ended with fewer than 40. In spite of this, student groups somehow survived: the school newspaper, the basketball and baseball teams, and the Tara Knights service club were all active during the War Years. Only three members of the entering class went on to receive Bachelor of Arts degrees in August, 1944. Returning veterans, attracted by Iona’s practical majors like Accounting (and their tuition underwritten by the G.I. Bill), soon stretched the College to its limits. Seventy-one men graduated in 1948 and 300 in 1950.

Guiding the College through its tenuous start and sudden growth were two gifted Presidents: Br. William Barnabas Cornelia (1885-1955) and Br. Arthur Austin Loftus (1904-1979). One a native of Dublin, the other a native New Yorker, they brought intelligence, tact, shrewdness, humility, and a true love of teaching to the new enterprise. As the College changed from an intimate community nurturing teenagers to an expansive plant educating battle-tested veterans, Br. Cornelia and Br. Loftus maintained a steady course. Ambitious for success and accreditation, they never lost sight of the College’s Mission – to give Iona students the best secular training while educating the “whole person” – mind, heart, and spirit.