Walking into Meet the Greeks his sophomore year, Jude Michael Murphy attempted to sift through a sea of stereotypes as he sought out a group that would give him a sense of attachment and pride at Iona College. Yet something was missing.

“I wanted something different,” Murphy said. “I wanted to bolster Greek life, I wanted to impact Iona in a beneficial exciting.”

While attending their first mid-year conference in Baltimore, Maryland, some of Iona’s founding fathers were struck by how welcoming the various chapters were. Murphy and his fellow founders were able to garner infinite amounts of knowledge in only a few days that renewed their excitement and inspired them to pursue their status as a legitimate chapter at Iona College.

At this point in time, Murphy says the only thing that is stopping Pi Kappa Phi from becoming a full chapter is a matter of paperwork. In a mere few weeks, the new fraternity has almost completed the necessary fundraising, and has far exceeded the minimum number of members needed.

Murphy knew that from the very beginning, Pi Kappa Phi would be embraced by the Iona community simply due to the nature of their uniqueness. And while fellow fraternities on campus may question Pi Kappa Phi’s motives, Murphy states most innocently that all he wants is to bolster the reputation of the Greek community to recruit as many students as possible to the misinterpreted lifestyle. 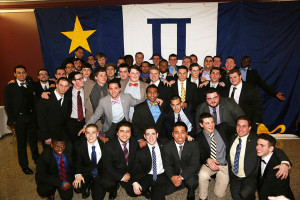 The creation of Pi Kappa Phi will improve the nature of Greek life at Iona, and will in turn improve the livelihood of the entire community. And at any rate, Pi Kappa Phi is more than ready to lead Iona’s Greek life into a new era of excitement and energy never seen before.